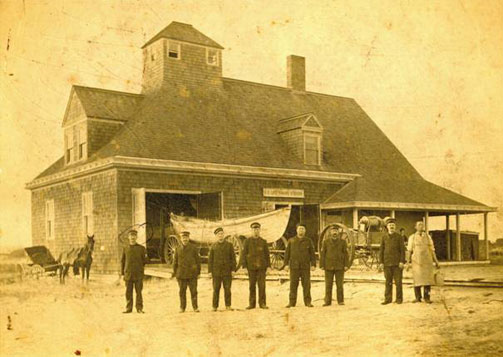 Before vacationers captured Maryland’s sandy beaches, life on the coast was harsh and treacherous. For 100 years since 1850, the lucrative business of pound fishing lined the shores of the Mid-Atlantic states. It was a hard life. No matter the weather, pound fishermen launched their 22 foot boats into the surf to staked weirs 100 feet to 1/2 mile off shore. Fish filled nets were hauled in by hand, transferred to baskets, rowed to shore, packed in ice and hauled by horses across the sand beaches to markets in Baltimore and Philadelphia.
Without the horse the fish business could have been a bust.

The small boats used by fishermen were similar to Viking boats designed 2000 years ago. They also served Life Saving Stations built to provide rescue support to those ship-wrecked along the treacherous coast line. After 1871, Life Saving Stations housed rescue equipment, a keeper, 6 surf men and sometimes a horse.

The Ocean City Life Saving Station was built in 1878. It consisted of a shed to shelter the small boat similar to one on exhibit at the National Park on Assateague. In Ocean City, the building was enlarged to accommodate a crew. The facility is now a museum that tells the story of these life-saving heroes.

November to April are particularly hazardous times when storms drove large sailing vessels into shoal waters. Men patrolled the shores day and night in all types of weather searching for wrecks. Horses often walked with the beach patroller to be on hand to race to the rescue station with the alert “ship ashore”.

Alerted, the six men teams pulled the surf boat from its shed to launch rescue support. Sometimes a station would be fortunate to have a horse help pull the skiff through the stormy weather and over sand dunes.

On January 28, 1915, the Life Saving Service, by action of President Wilson, became the US Coast Guard.