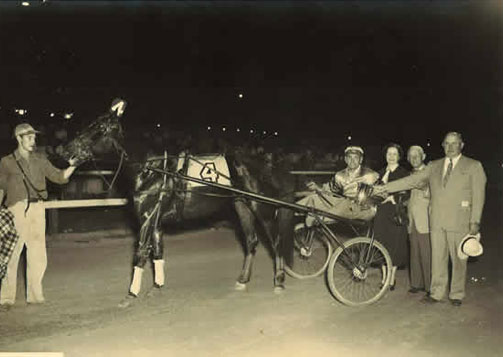 In 2014, Ocean Downs celebrates its 65th anniversary as a harness racing venue, providing spectators horse racing different from Maryland’s traditional thoroughbred events such as the Preakness and the Maryland Million. This is fast and furious pacing or trotting horses pulling drivers riding in two-wheeled carts called sulkies.

Opened in 1949, the track between Ocean City and Berlin, Worcester County, Maryland, became Delmarva Downs in 1986, then reverted to the original name, Ocean Downs, after being purchased by William Rickman in 2000. In 2011, an adjoining $45-million casino opened. There are no horses permanently stabled at the site, but they come in each day races are scheduled to compete.

Harness Racing at The Great Pocomoke Fair, held each August in Pocomoke City, Worcester County, Maryland, is part of the grand tradition of agricultural fairs that date back to Biblical times. By the 1700s, American colonists held such fairs throughout the region.

Inaugurated in 1901, the Great Pocomoke Fair includes the traditional farm produce and livestock competitions, a horse show, exhibits, side shows, carnival rides, and, of course, great local food. The highlight, however, is a day of harness racing, featuring both exhibition and sanctioned races of a wide variety such as “Over 50” pace/trot for older drivers, the popular “Heavyweight Challenge” for drivers over 225 lbs., and “Stars of the Future” for drivers aged 14-18 years.